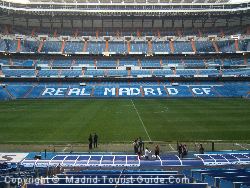 How To Travel To The Real Madrid Stadium

The official name of the Real Madrid stadium is Estadio Santiago Bernabéu. It's easy to find, just take the metro.

When you get off the metro, or the bus, you can't miss the stadium. Inside there is capacity for 80,000 spectators, and the pitch measures 106 x 70 metres. There are eight lifts that take you to the upper stand, where you'll find that the panoramic view of the stadium is breathtaking.

You can take a tour of the stadium. You can either just turn up and make your own way round, following the arrows. You will be given a guide book in Spanish and English. Or, if you have a large group of around 20 people, you can book a guided tour in advance. 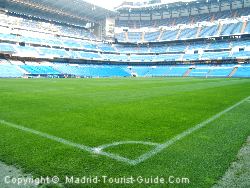 The Real Madrid stadium was inaugurated on December 14 1947. Previously to this Real Madrid played at Viejo Chamartín. The Santiago Bernabéu stadium has undergone several renovations over the years, which have resulted in it looking stylish today.

The first match ever played there was Real Madrid vs OS Belenenses (the Portuguese Club) on December 14th 1947.

Santiago Bernabéu was the man with the vision to create the stadium. Hence it is named after him, as at the time of its construction, the Real Madrid stadium was one of the best that there was.

The hop on hop off tourist bus lets you jump off to visit an attraction, then jump back on the next bus visit the next attraction.