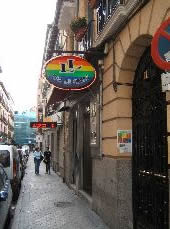 There are several gay bars in the Chueca area of Madrid

This page tells you about some of the Madrid gay bars that you can find throughout the city. The gay scene is concentrated in the barrio (district) of Chueca, which is near to the centre. Chueca is not exclusively gay and you'll also see straight people enjoying the ambiance. We've written a short description of some of the gay bars, and provided directions and the nearest metro.

Madrid Gay Bar: Where To Go

The most popular area for the gay community to go out socialising is the barrio of Chueca. There are two main streets that contain bars, restaurants, shops and accommodation. These streets are called Fuencarral and Calle Hortaleza. They both begin on Gran Via, one of Madrid's most central roads. Shops and bars that classify themselves as 'gay' usually hand a multi-coloured flag outside. Chueca as a whole is colourful and jammed full of interesting little bars.

The lesbian scene is happening in Chueca, but you will also see it in the area of Lavapies.

Madrid is a open minded city and the gay community are by no means confined to these two areas. 'Gay' bars attract all kinds of people. I have spent many a Sunday afternoon in a chill bar in Chueca called La Lupe, and thoroughly enjoyed it.

The bars throughout Chueca don't tend to open until night time, from around 21:00 onwards, and they don't get busy until midnight. The atmosphere is usually fun and lively. There are quite a few more chilled out bars in Chueca that get busy on Sunday afternoons, and many bars lay on entertainment. 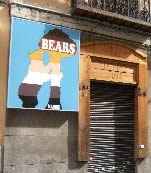 The Bear Bar is popular with the gay community

This bar is easily recognisable by the image of the bear leaning against the tree. This is the official emblem of Madrid. This street is full of bars, and you could easily spend the whole night here.

LL is easily found due to it's bright rainbow coloured sign. It's open daily till late and generally has a fun atmosphere.

To find the highest concentration of Madrid gay bars, you should head for Chueca. It's near enough to the centre that you can easily walk to other areas to go out as well. Most of the bars in Chueca are within walking distance of each other, and you'll find a mixed crowd generally in the area. Chueca is a young and vibrant barrio that gets going late, but stays lively until the early hours.