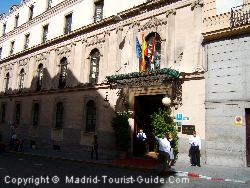 The Hotel Gran Meliá Palacio de los Duques Madrid is a regal building in a quaint and historical district of Madrid, near to the Opera square and Royal Opera House. The building was originally a palace belonging to the Duchess of Granada de Ega, and it maintains many of the original features.

Entry into the hotel is through two enormous wooden doors, and the reception is open and airy. In-keeping with the hotels stately feel, there's even a suit of armour guarding the stairs. 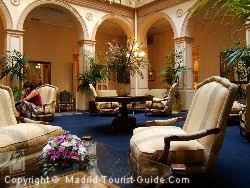 There's a restaurant 'Invernado' and the 'Entrepatios' bar. The bar is like an oasis of green, and has the feel of a lush garden. I could have stayed in there for hours, because it was so cool and peaceful. The restaurant serves typical Spanish cuisine, and a buffet breakfast, and the bar has sandwiches, tapas and cakes.

The Hotel Gran Meliá Palacio de los Duques caters well for business meetings. 5 meeting and banqueting rooms for 10 up to 300 people are available. Some of the rooms can be combined to accommodate larger parties. The hotel also has PA systems, telephone and internet access in the meeting rooms and TV.

The Hotel Gran Meliá Palacio de los Duques Madrid has182 rooms, including 23 junior suites and 3 senior suites. The suites are spacious and well lit with an open-plan lounge area and writing desk. Some of the rooms have balconies with space to sit out and take in the pleasant atmosphere of this district. The rooms are well laid out. 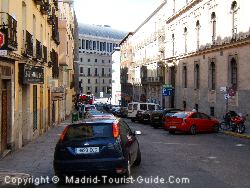 The Street Leading To The Opera House Next To The Hotel Gran Meliá Palacio de los Duques
This is the place to be for all fans of opera and theatre because you are just a couple of minutes walk from the square in front of the Royal Opera house and the Royal Theatre. 5 minutes around the corner is also the Royal Palace and the pretty Plaza de Oriente, where people sit and take in the sun or stroll amongst the trees.

This district is one of the most pleasant with a relaxed atmosphere, beautiful buildings and an abundance of trees and flowers. Although you're also only 2 minutes from Gran Via, which is bursting with shops, banks, bars and restaurants. 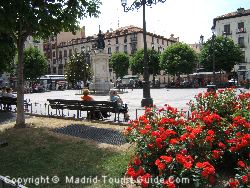 How to get to your hotel from Madrid-Barajas Airport

Via Taxi: A taxi from the airport will be about 30 minutes depending on traffic volume. The following price includes airport supplement and is valid assuming there is no excess baggage (that all baggage fits inside the boot and interior of the taxi).

Metro: You can take various metro routes directly from the airport to arrive at Santo Domingo metro near the Hotel Gran Meliá Palacio de los Duques Madrid. Line number 8 leaves from inside the airport between terminals 1 and 2. I've given the quickest route below with the stations where you need to change listed:

Via Bus: The red EMT public bus from the airport goes to Avenida America. The number bus that takes this route is the 115. From there it's quicker to change to the metro.

This is a beautiful hotel both inside and out. You'll enjoy a relaxing stay in its cool and well designed rooms, whether you are on business or pleasure. It has fantastic access to central shops, bars, restaurants and theatres.

How to Find A Cheap Flight to Madrid